Talk about absolutely anything here!
Reply


MineRealm updated to MC 1.13.2 (Aquatic update) on 12 Dec. 2018. Unfortunately, much of the new content can only be introduced by generating new chunks e.i. exploring new areas.

Kelp was spotted in newly generated chunks 132 blocks outside the western world border on 21 Dec. 2018. Below image compares the in-game view and the online dynmap at 3 points of interest: The player, an island, and new kelp chunks.

Below is a zoomed image on the kelp: 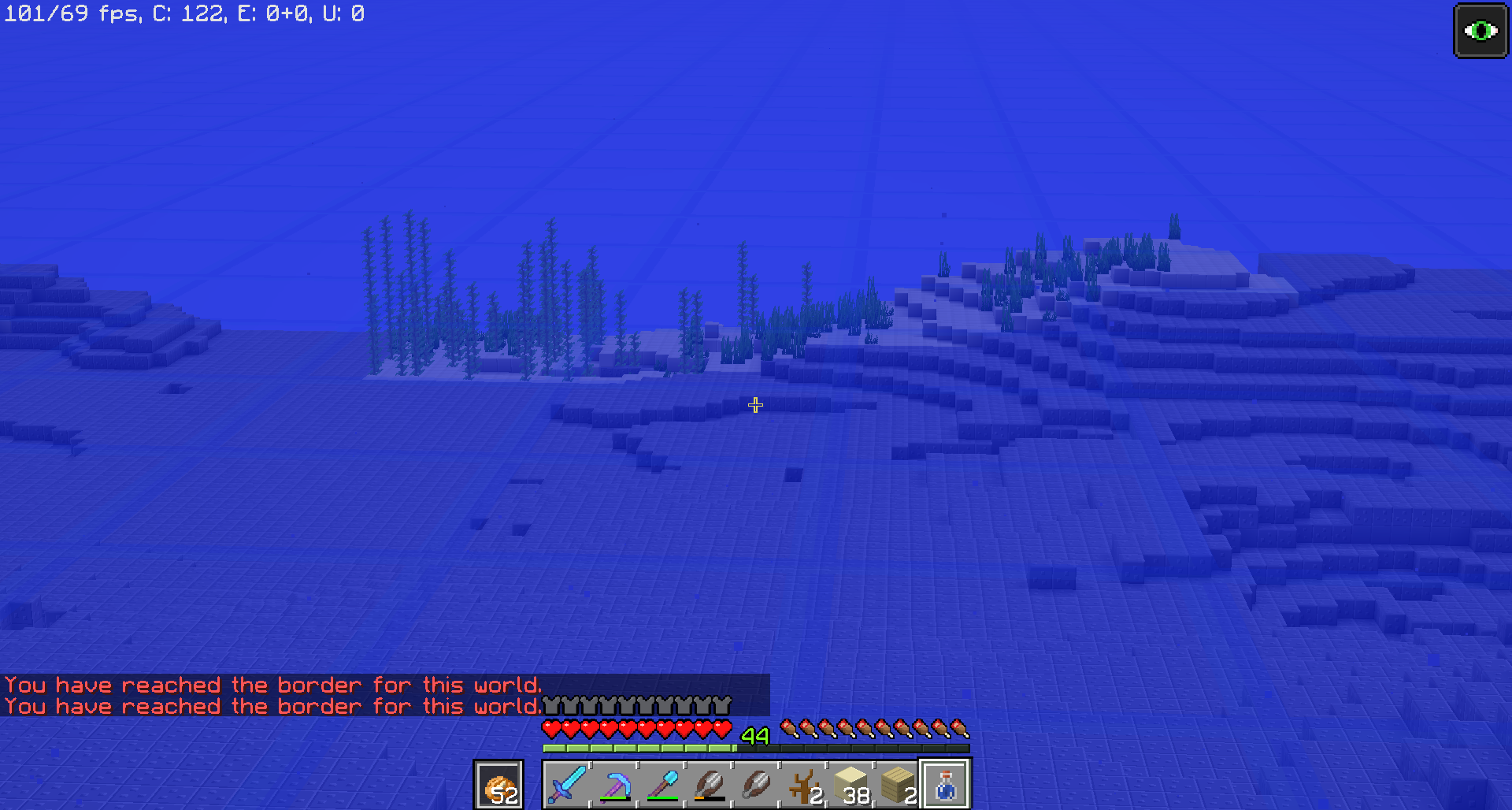 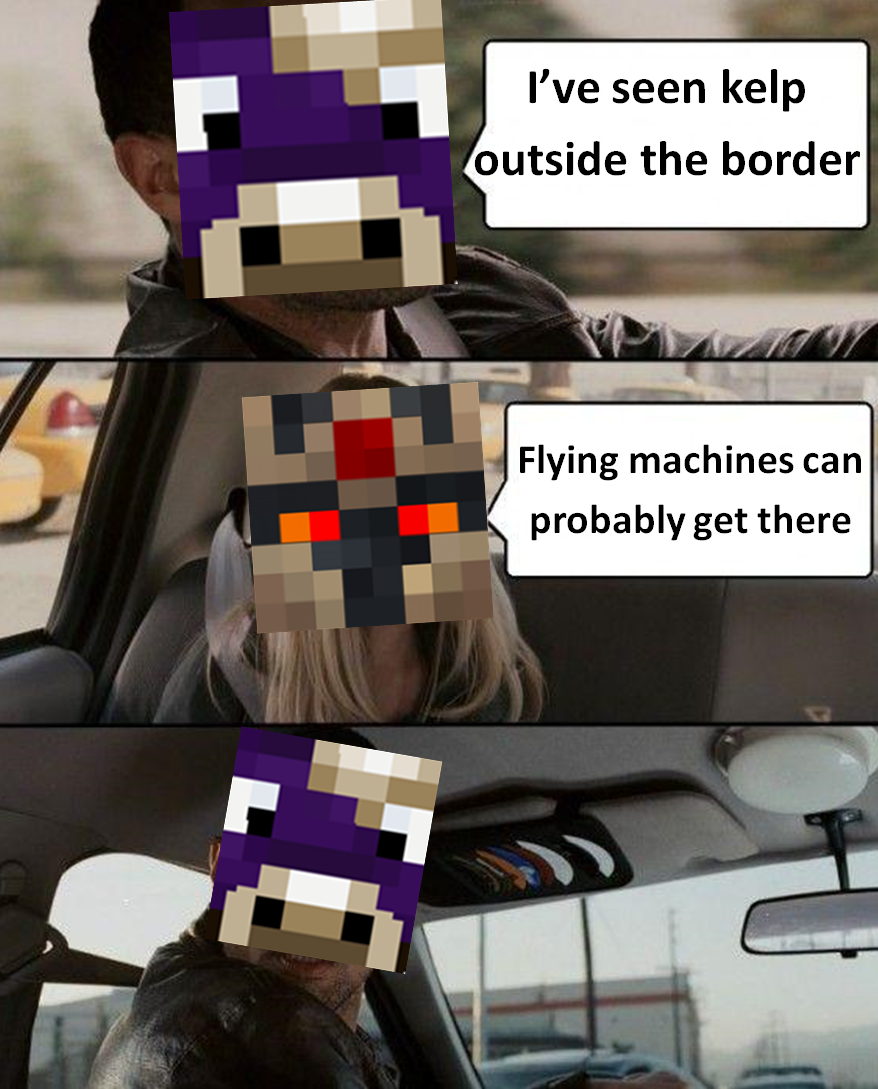 ^ Photo of how it started.

The very same day, the Kelp Kuest was initiated to claim just one kelp to farm and share with the MineRealm community. On this first day, a dedicated flying machine engine was developed. The program-like function of this engine is:
1. Fly forward until stuck (8 or more blocks of cargo)
2. Fly backward until home (stopped by obsidian)
As this engine is able to carry 7 blocks of cargo it can be specialized for various mining purposes that at best takes 7 blocks of cargo home each run. Oh, and it can run underwater.

As the engines can only fly straight, two large sub-sea hills were in the way. These hills are located between the border and the kelp.
Phase 1 began: Mine a path through the two hills. This is a time-consuming process, but as the operation ran, it attracted more and more people that wanted to help. During normal operation, it was common to see one operator (one player running the engine) and one drill cleaner (one play removing the mined cargo form the miner). We mined and mined, until...

One casualty occurred as a flying machine got stuck. Three quick attempts were executed to retrieve the lost miner, but it only made it worse, as those rescue miners where also stuck. Fortunately, 1.Dec eah was able to recover them using brain. Here is the recovery video:

Mining commenced and we managed to clear a straight path to the kelp, what now? Glad you asked.
Various of tests have been carried out to identify timings and distances. Our first idea was to use a harvester engine that had an onboard hopper-minecart, but we discovered it would be unfeasable as the out-of-border-kill-clock triggers every minute and the entire trip takes 140s. But, what if the carts were running on powered-rails? We timed it, and it took a cart little under 40s make the entire trip. As 40s is less than the 60s of the kill clock, this trip is possible if timed right. 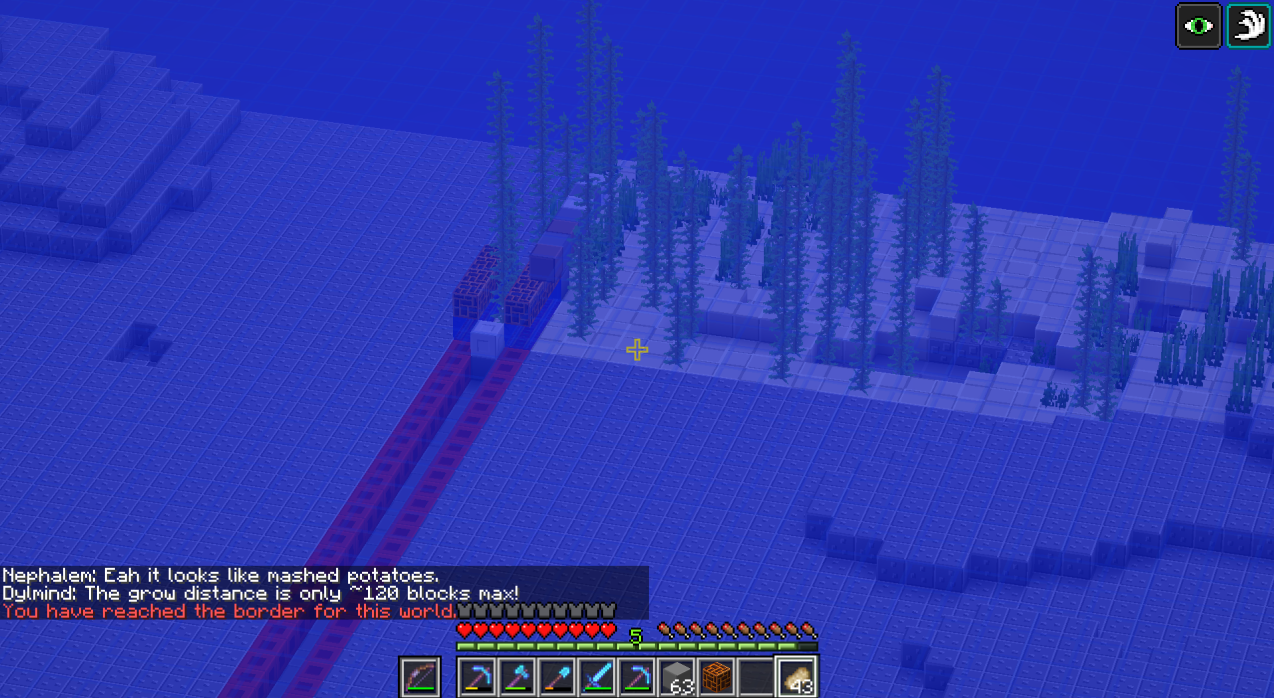 ^ kelp setup, notice there are magma blocks to pull dropped kelp down.

We laid rails (great help from PJ and the Railroad song) all the way to the kelp using dedicated flying machines. One rail-line on each side of the target kelp to increase yield chances. The intent is to only knock-out the second kelp (not the root) to make the attempt repeatable. However, players need to be within 100-120 blocks range of kelp before kelp can grow. So... not repeatable.

The diagram below shows the timing of the first kelp-retrieval-attempt: 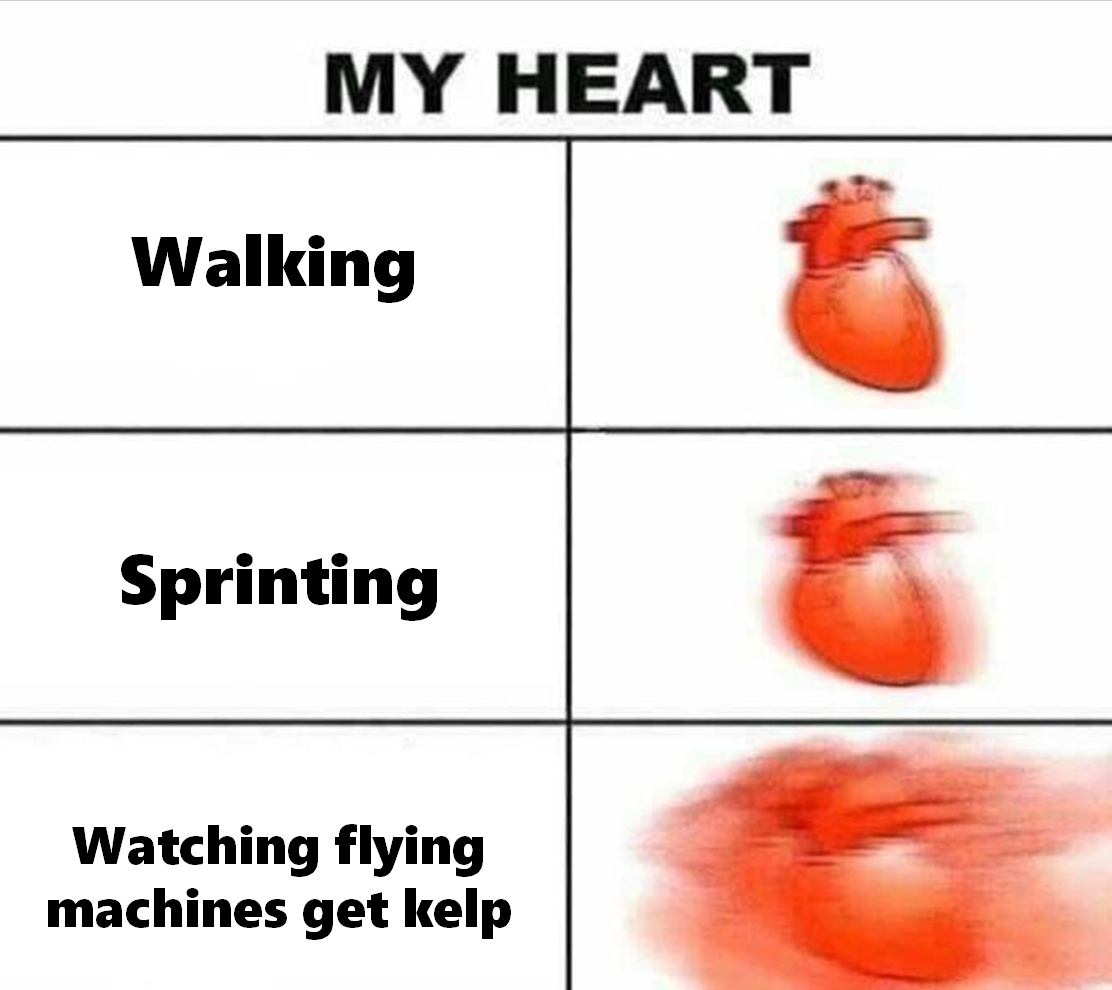 This harvest was much anticipated and had several spectators, but alas, the carts returned empty handed and the kelp-root doomed to never grow due to being to far away. 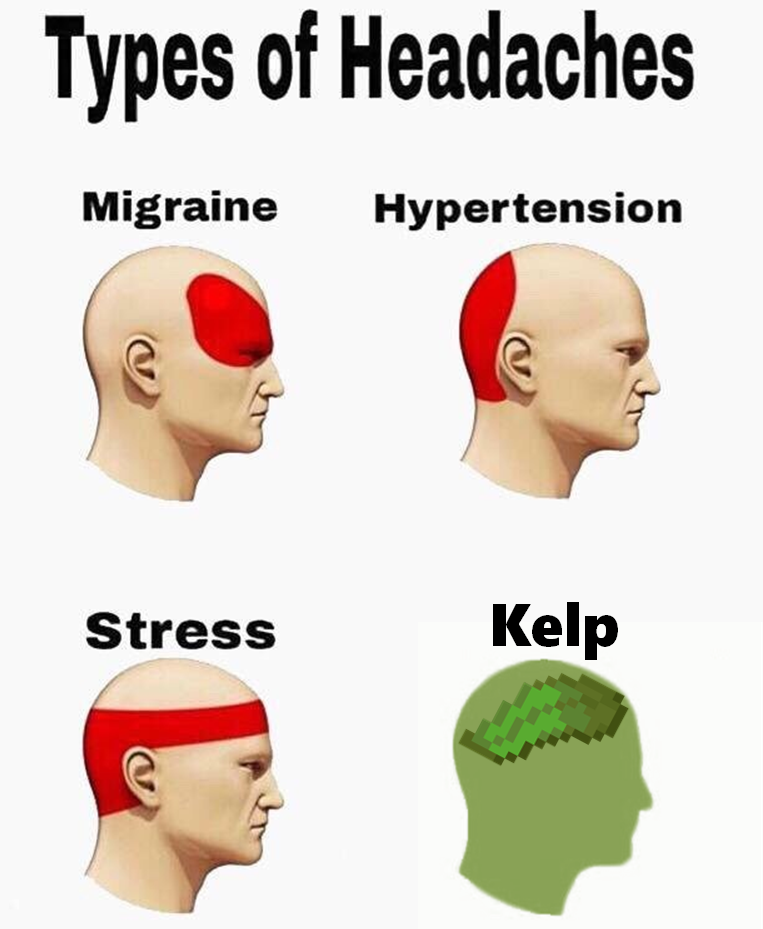 With low morale, the operation initiated another attempt, refered to as the "oneshot"-approach. This would be a harvest designed to be done only once, by blocking in the kelp, draining air, and perfectly planning where the kelp would go. So we started clearing the hills again for the oneshot-approach, that was until we found something interesting.

One of the kelp crew helpers found out that you can cross the border whilst riding minecarts. However, the minecarts are still subject to the 1-min-kill-clock. So several players took trips on the two placed railroads to explore the lands on the other side of the border. The kelp now grows, and the players repeatedly knocked out the newly grown kelp.

A rebellous act was made be one of the helpers, and knocked out the root kelp. This made the setup unrepeatable, but fortunately it yielded kelp, the kelp was returned, and the site closed. The prime kelp was given to me, and we started to grow kelp.

1 made 2, 2 made 4, and soon there were doublechests of kelp. All online players were given kelp, and friends gave to friends. The beauty was that noone ever claimed credits for this. Kelp is free, kelp is for everyone. 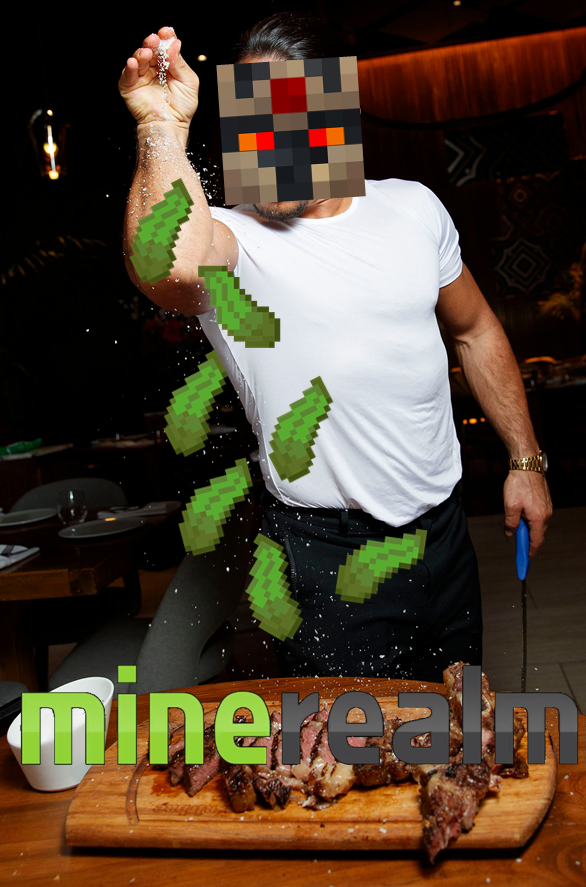