Post any ideas / suggestions for the game servers here.
Reply

EpicBros wrote:Bash your head on your keyboard and call it "pvp".

The gamerule mobGriefing is already enabled.

>[Server thread/INFO]: mobGriefing = true
"When you do things right, people won't be sure you've done anything at all."

Alright, further changes have been made. Let me know if it's now fixed.
"When you do things right, people won't be sure you've done anything at all."

1.) Since we updated to 1.13 I've noticed that water won't break crops like wheat, potatoes, carrots, and beets.

2.) The spawning of non water passives like wolves, llamas, parrots, polar bears, and ocelots seems broken as neither I nor anyone have seen these mobs spawn in years. The same is more or less true for other more common passives as well.

3.) 1.13 has added a command suggest functionality that is constantly popping up and overlay of players names when using a /g, /m, or /b command to chat. It is very annoying. I dont know how easy this would be to fix, but if it could go the way of the dinosaurs we'd really appreciate it.

Here is an example of the overlay that pops up of names which used to only show up only if you hit "Tab" but now reappears with every word you type. 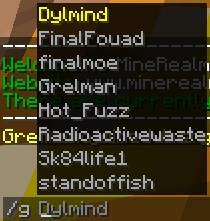 lastly, theres this weird glitch where useful F3 info like light level, biome, and coordinates is missing from where it should otherwise be

The only portal out of the nether that works is the nether spawn one. All others transport the player 20 something blocks in a random direction regardless of air or solid blocks and a lot of people have died as a result.

Bonemeal can be used by anyone on private plots.

Anyone can take books off of lecturns.

Anyone can take armor off of armor stands.

Firstly, mob spawners only spawn 1 mob at a time regardless of server TPS. Typically, they should spawn 3 or 4 at a time. Secondly, the mobs spawn with AI disabled and will just stand there, never attacking or moving at all. This can be confirmed easily by going to any mob spawner.